Functional Dependency is a constraint between two sets of attributes in a Relation that mathematical concept is helps to design and optimize a Relational Database Structure. Dependency can be categories into two types are "Single Valued Dependency" and "Multivalued Dependency".

Let r be a tuple of a relation R and A be an attribute of R. Then r(A) is the A is component of r (i.e., the value of r for the attribute A). When, a relation R is defined with set of attributes (A, B, C, D) that can determine È (union). Let X be a subset of È, and let r be a tuple of R. The projection of r onto X, written r[X] is a mapping from the attributes of X to their domains such that r[X](A) = r(A) for all A in X. The projection of the relation R onto X is obtained by projecting each tuple in R onto X and eliminating duplicate tuples.

An instance, a relation R, a set of attributes X in R is said to functionally determine another attribute Y in R, IF and Only IF each X value is related with exactly one Y value is called Functional Dependency. IFF (IF and Only IF) is a biconditional logical connective between statements based on combination of material conditional (IF) and Reverse (Only IF) statements. 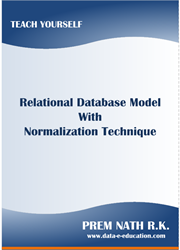